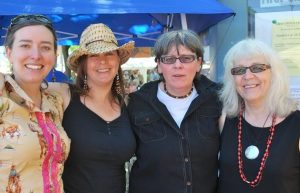 For Jen, Patricia, Sarah and Carmel, playing in Gil’s Hootenanny is a natural extension of their identity, as equity, social activism and social justice, combined with audience participation, are central to their performance style. As Jen says: “Our songs are routed in personal, social and political realities and infused with women’s lived experiences.”