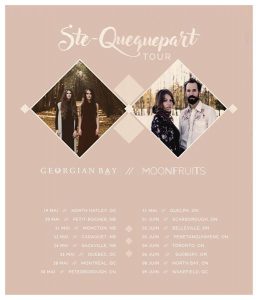 Shortly after headlining Gil’s Hootenanny, Moonfruits – Kaitlin Milroy and Alex Milliare – will be releasing their first French-language album, Ste-Quequepart, which they describe as a “folk concept album that plays like a short film soundtrack.” After the mid-May album release, Moonfruits will be heading out on a Canadian tour to promote the album, which likely means they will be on the road for much of the year. The tour will give the band the opportunity to focus on the things they enjoy: writing and performing music.

Like many musicians, Moonfruits are already thinking about their next album. They are anticipating incorporating theatre, radio, spoken word, movie soundtracks, visual art and animation into their live performances and into their future career plans. As Alex says, “We both would love to continue our creative collaboration with our producer, Don Charette of Naskigo Productions.”

Kaitlin adds, “we feel incredibly lucky to be meeting some goals we set a few years back… and we’re laying down the groundwork for that greater variety of expression we aspire to.”

The 2017 Hootenanny will take place on Monday, May 1st at 7:30pm in the Clarke Room at the RA Centre, 2451 Riverside Drive. Staffed by UNIFOR members, the RA Centre is accessible, has loads of parking and is well serviced by OC Transpo. Tickets for this all-ages event will be $10 per person (kids are free). Tickets are available online (www.rasputins.ca), at the door, or they can be purchased at Metro Music, 695 Bank Street & Octopus Books, 16 Third Avenue (west of Bank).