It Started with Family 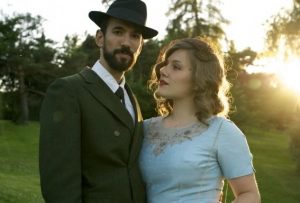 As is the case for so many musicians, family encouragement was crucial for Moonfruits’ Kaitlin Milroy and Alex Milliare in nurturing their talent and inspiring them to pursue careers in music.

Family lore has it that Kaitlin’s first musical experience occurred “in the womb during a Clarkson Music Theatre production of Flower Drum Song”. Those early stirrings were cultivated in Kaitlin’s family, as she and her brother played in concert and jazz bands in high school, and were known for putting on – with the help of their cats – their own “shows” for family and friends.

Kaitlin loves singing and considers that her most important and formative childhood musical experiences were as a member of the Oakville Children’s Choir for over 10 years. Being part of the choir gave Kaitlin the opportunity to meet, travel and perform with other young singers. She recalls being “deeply inspired and sometimes choked up by the huge sound of group singing”.

For Alex, his mother started him in music when she asked if he was interested in following his best friend’s lead and start playing guitar. Nine-year old Alex instantly said yes, and thus began his eclectic musical education – from classical guitar to his appreciation of the rock music of Radiohead, Tool and Rage Against the Machine. 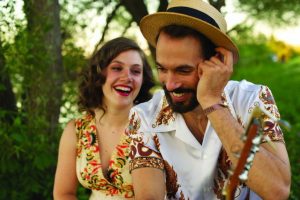 Alex recalls attending a rock camp with high-school friend and “wonderful singer-songwriter” Leif Vollebekk, who opened his eyes to “funk, soul, the British Invasion bands and, most notably, folk music.” As Alex says, “folk is pretty well all I play now.”

Check back in a week for an article on Moonfruits and the evolution of their approach to songwriting.