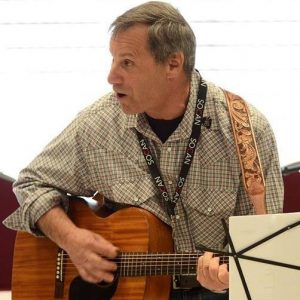 The winner of the 2016 Hootenanny songwriting contest, Mark’s love of music started when he was 13 and learned three chords on his sister’s guitar. Those few chords led Mark on a decades-long musical voyage that includes performing, songwriting & recording.

Mark started writing songs when he was 16. His early musical influences include John Prine, Gram Parsons and John Sebastien, three artists who reflect his eclectic musical repertoire. While Mark describes his early songs as “awful”, he persevered in his singing and songwriting and is now an award-winning musician who takes special delight in hearing his songs performed by someone else.

Mark’s success proves that good songwriting is not limited by age but by passion, talent and perseverance. As he says: “I’ll just keep plugging along trying to write a few good songs.”