“Gil’s at Grassroots”:
A Celebration of Original Sing-Along Songs
April 28th at 4pm

Building on the long tradition of working together to create melodies and lyrics for protest songs, Gil’s Hootenanny is hosting a free afternoon session at the Ottawa Grassroots Festival on April 28th that will feature recent, collaboratively-created, original “Songs of Protest, Songs of Hope”. 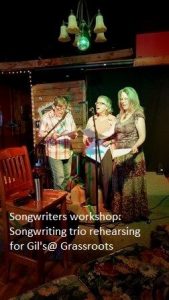 Called “Gil’s at Grassroots”, this afternoon event will be hosted by Tamara Levine and will debut original sing-along songs created at a series of Gil’s Hootenanny-sponsored songwriting Workshops. These Workshops bring established and novice songwriters together to craft, finesse and finalize musical and lyrical ideas for sing-along songs, mentored by Ottawa-based singer-songwriter Jamie Anderson.

Other performers at “Gil’s at Grassroots” include Jamie Anderson, the Elizabeth Riley Band, Chris White, Mark Evenchick and Clarissa Fortin.

“Gil’s at Grassroots” is free and will be held on April 28 at 4:00 pm at the Southminster United Church, 15 Aylmer Avenue (at Bank Street), Ottawa, ON.